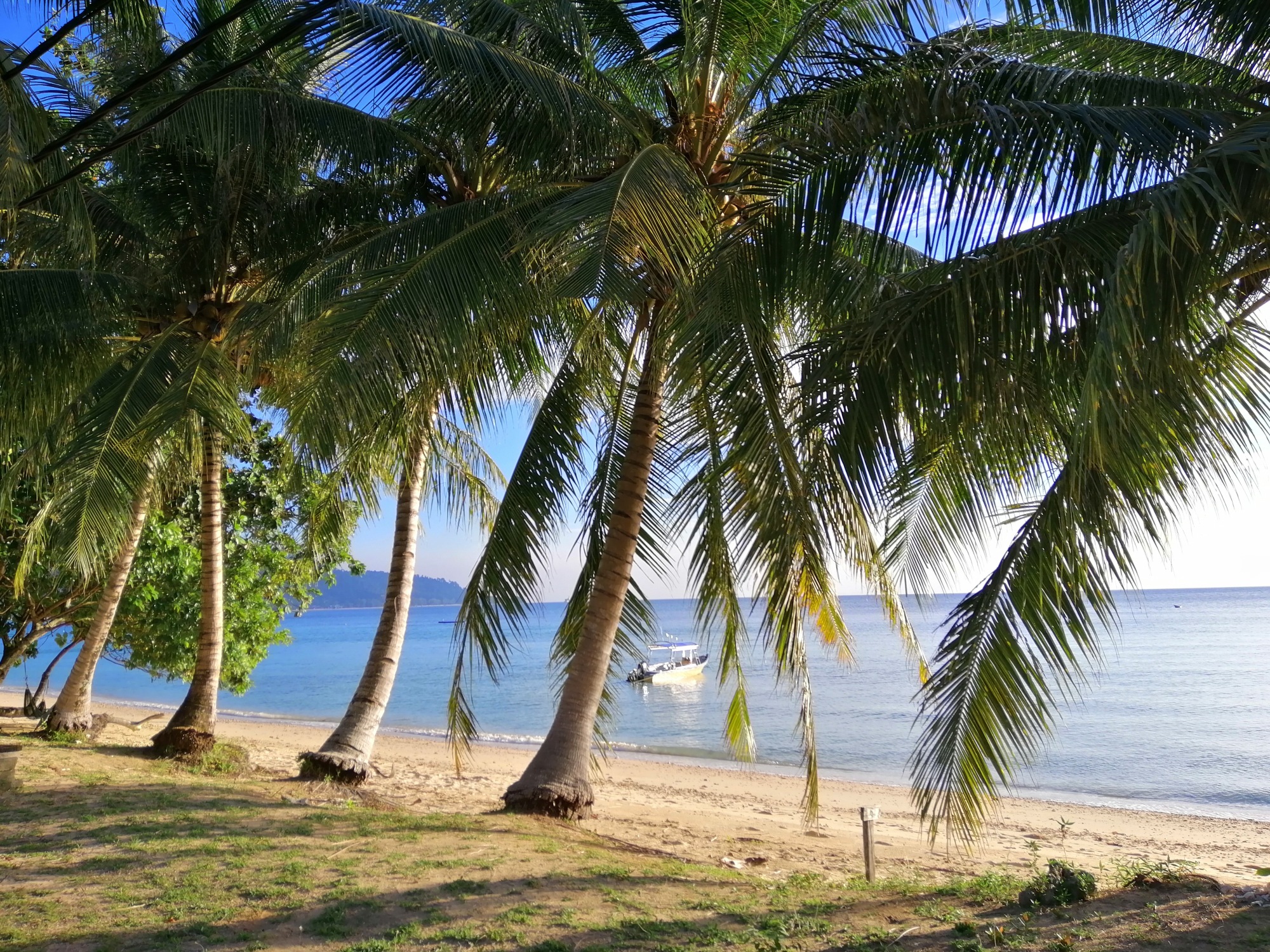 Week one of the summer holidays has passed by in the blink of an eye, marking one week since I said goodbye to my friends *sob*. Going back to the UK for the summer is great because I get to see my family and my not so brand new nephew but it’s not a holiday so Alice and I decided to take the very long and irritating journey to Pulau Tioman for an island to island getaway.

Pulau Tioman is an place that I’ve spent two years hearing about. It’s a place that is important to Alice and I was yet to have experienced it for myself. My love for islands and coral reefs has dramatically grown since moving to Malaysia and I am ashamed to say I am somewhat of a beach and coral snob now. This is partly because there is so much plastic and dead coral destroying beautiful Asian coastlines and also because I’ve been lucky enough to visit some incredible, well looked after beaches and coral reefs. Luckily, Tioman is an island that is trying hard to conserve its natural beauty.

To get to Tioman it is a long old journey. First get a plane to Johor Bahru. JB is one of the most dull, beige places I’ve ever briefly visited and all you can see from the plane is palm oil plantations as far as the eye can see. The bus station is grotesque and looks like something out of a horror movie. Next take a bus to Mersing. Mersing looks like it’s stuck in a past decade but with the sun shining has a small amount of character. Finally get a ferry to Tioman. Depending on your luck this can take one day or two days.

We stayed in Tekek, the ‘town’ of Tioman. It’s not a town it’s one road of small buildings but this is a good thing. This means no one is building into the jungle yet. We stayed at Cheers which is where Alice always stays and spent quite a lot of time at Cabana cafe which is next door to the dive centre that Alice’s friend Rosie runs. Sadly Rosie was in the UK which is a shame because she’s great fun. I had heard a lot about Cabana, including that it burnt to the ground earlier in the year due to an electrical fault. They’ve done a great job of rebuilding it but sadly the wooden, rustic feel of the place has had to be replaced with concrete. When talking to the guy who works there we learnt that the fire brigade on Tioman had no training on how to use the hoses so they were useless during the fire. Classic Malaysia. People were trying to use sea water to put out the fire. Thankfully no people or cats were harmed and the place is back on track. 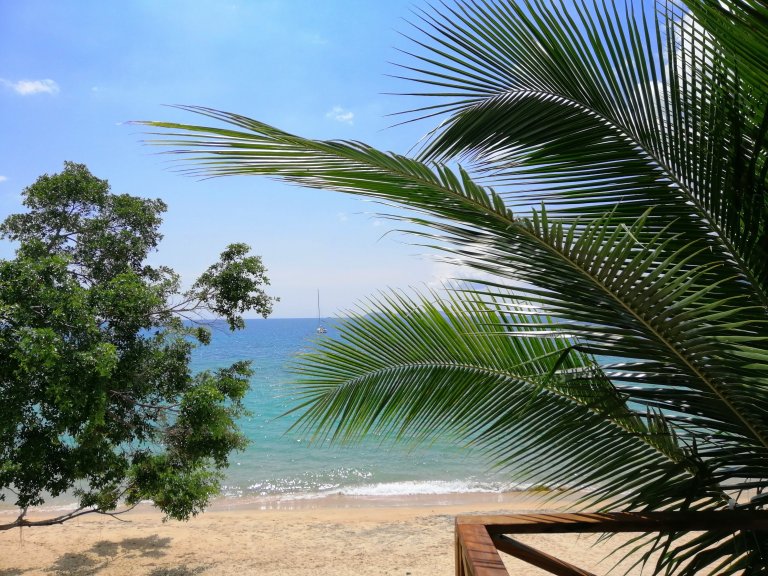 The only things to do in Tioman are snorkeling, diving, walking or lying down. If you don’t like to read books or look at fish then there’s nothing for you here. Good job these are my two favourite things to do. The water is crystal clear and there’s beautiful live coral just a few metres off the shore. No need to get a boat anywhere if you don’t want to, you can swim and see lots of sea life. We saw a turtle when we were swimming off Berjaya beach. 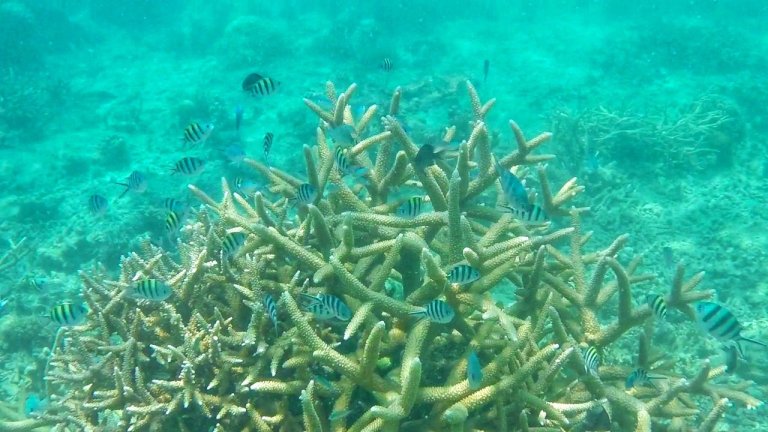 On Wednesday we decided to get a boat to Pulau Ringis in search of our second favourite sea animal, sharks (first fave whales- nailed that in Sri Lanka). We last saw sharks off Redang Island–also a beautiful Malaysian island. I got into an argument with the man running the snorkel stand because he was giving crackers to children to feed the fish. Don’t feed the fish guys, fish don’t eat crackers. Fish have their own eco system. Why are you messing with it? He told me he’s been on Tioman for 20 years and I told him he should know better. Luckily the child dropped the cracker on the floor and it cracked so no fish were fed. Sorry fish it was another day of natural hunting in the reef for you. 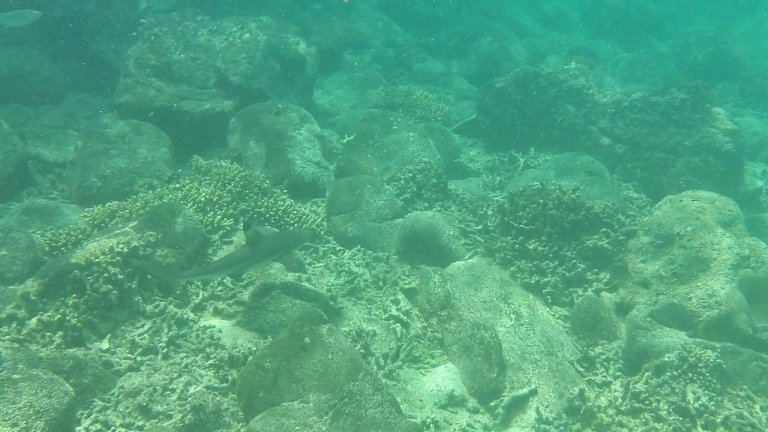 Black tipped reef sharks spotted! There was a slightly uneasy moment when we tried to swim around the other side of the island and the current was really strong and my snorkel kept filling up with water. Birds were eyeing us from the rocks in a really creepy manner. It was exactly like when the sea gulls in Finding Nemo squawk ‘MINE’. My fit bit told me my heart rate was 140 bpm. It’s a good job I’m a strong swimmer. We mutually decided to return the way we came and that’s when we saw the sharks. Stay safe in the sea people.

On Thursday we got a car to Juara on the other side of the island. The journey through the jungle was great and so relaxing. You can walk, it’s 7km. We opted out of that. When we got there we swam out to an inflatable trampoline and hoisted ourselves up onto it so we could jump off. This was pretty much our one activity of the day. 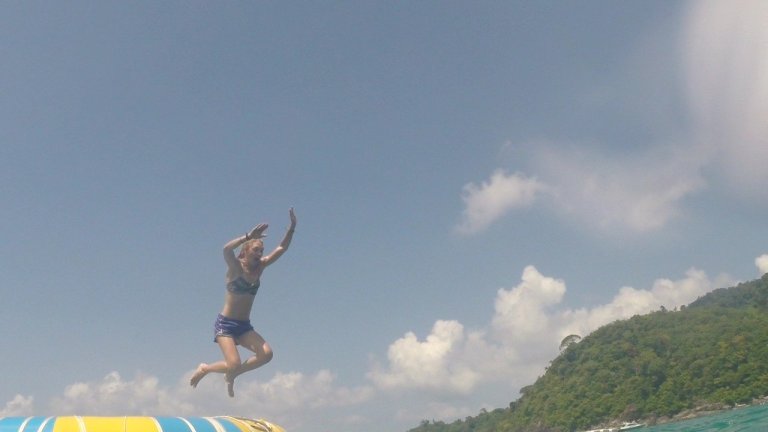 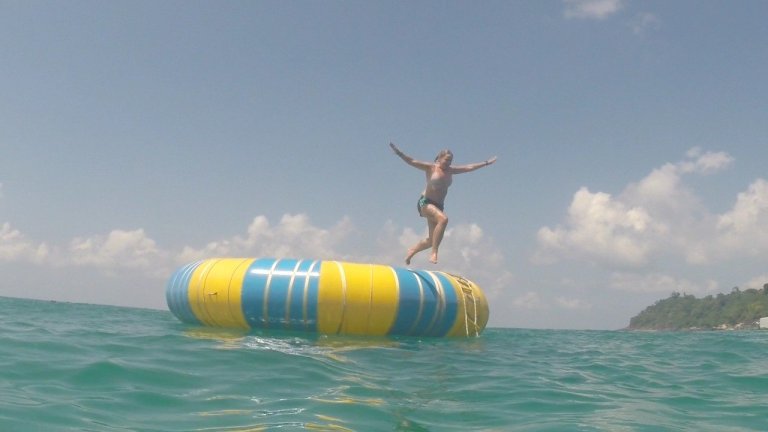 On returning to shore we discovered matching red lines across our legs which we thought were jelly fish stings. Some time later Alice pointed out that it was a rope burn from climbing up the trampoline. Oops. 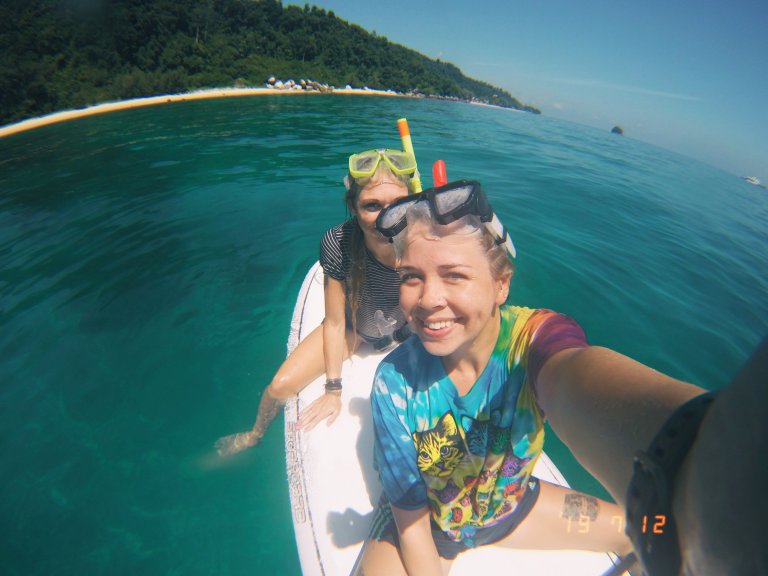 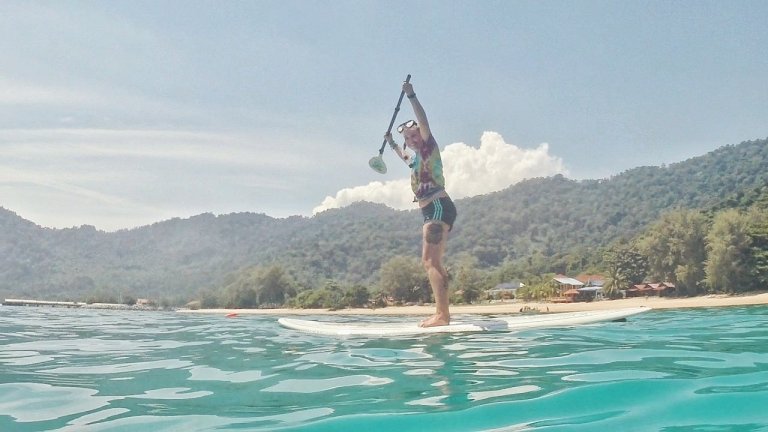 We discovered a new way to look at coral with minimum effort.

Unfortunately it wasn’t a successful attempt and Alice’s groovy, 12 year old snorkel sadly snapped and is no more. RIP snorkel. 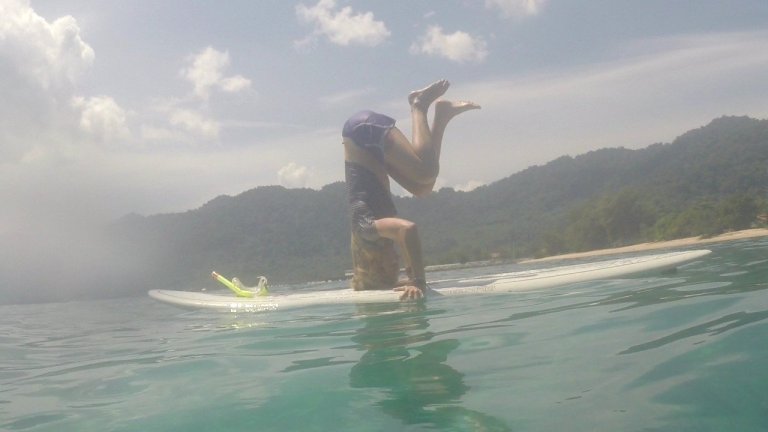 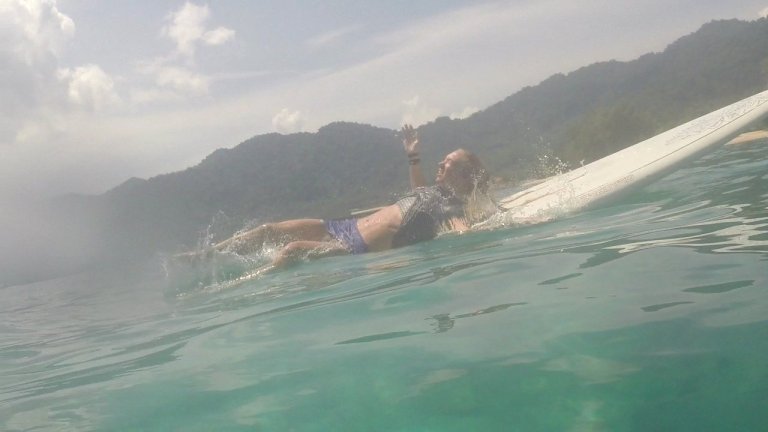 Other than this we did nothing except read a lot of books, talk about religion and complain about sand flies. Sand flies ruin the beaches on Tioman. Those tiny little blood suckers cause the itchiest, reddest bites. They’re now my number one most hated animal. I found out only the females bite which is the same as mosquitoes. Not feeling female solidarity at this time. 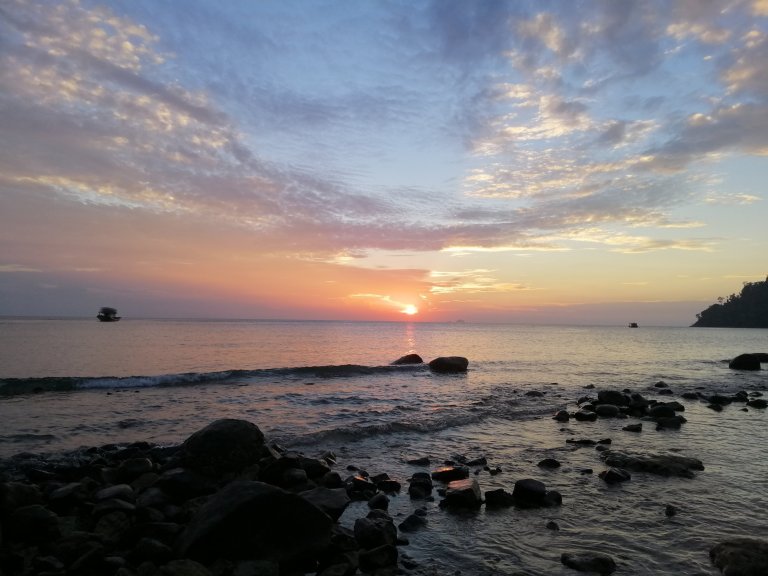 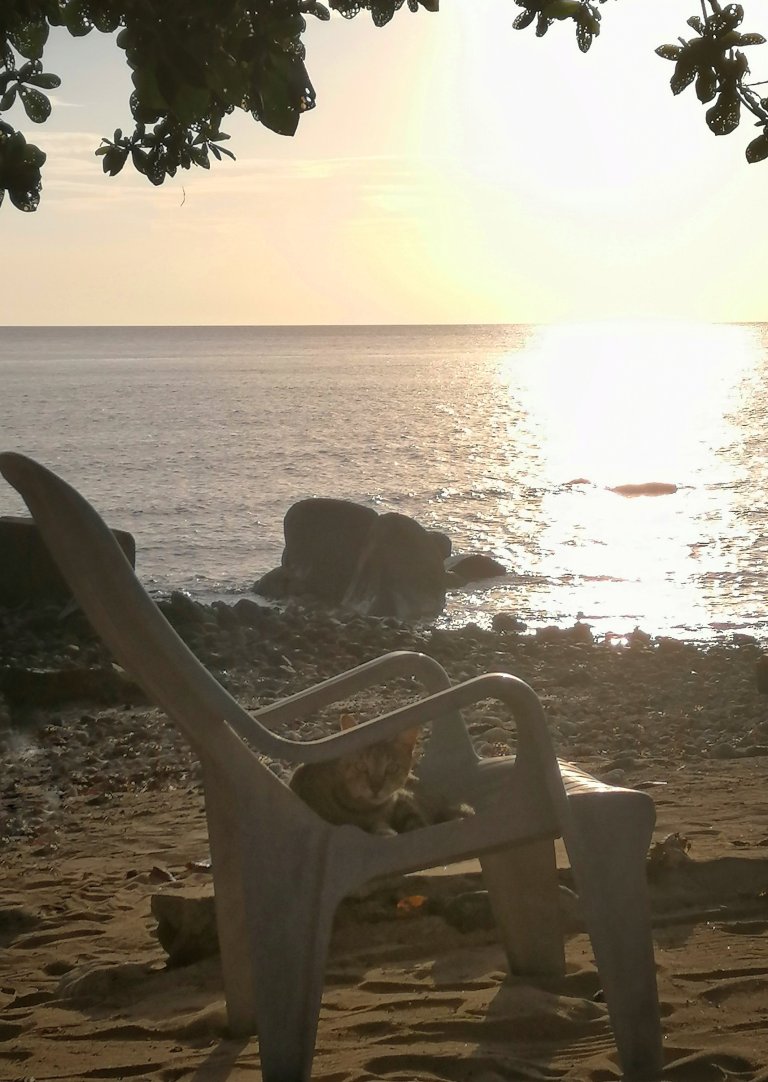 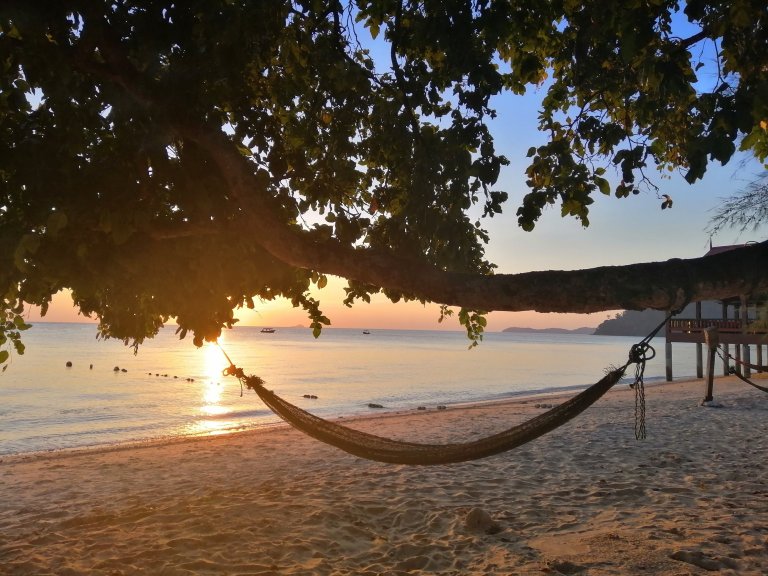 Pulau Tioman remains beautiful, fairly untouched and with incredible coral diversity and sea life. There’s active recycling going on, there’s coral planting going on and there’s a pride in the island and maintaining it. It was an amazing place to begin the summer holidays. Alice and I have had lots of adventures and I’m sure many more to come. 💕👭 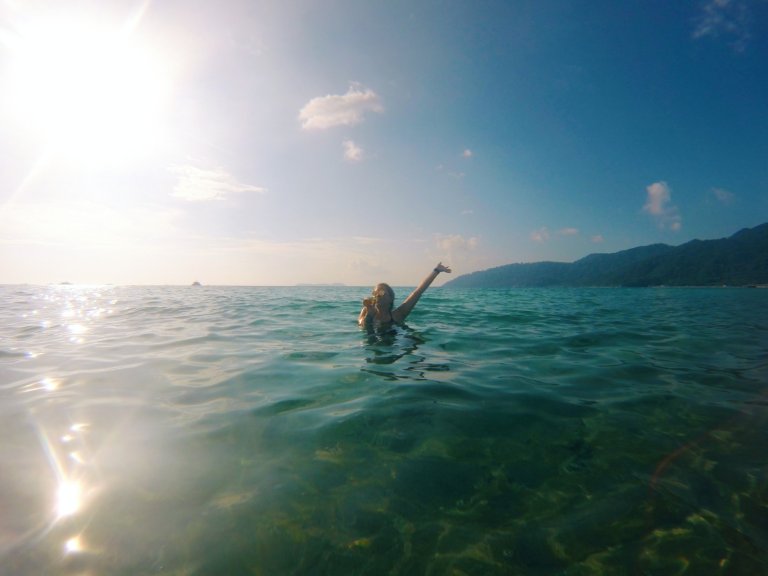