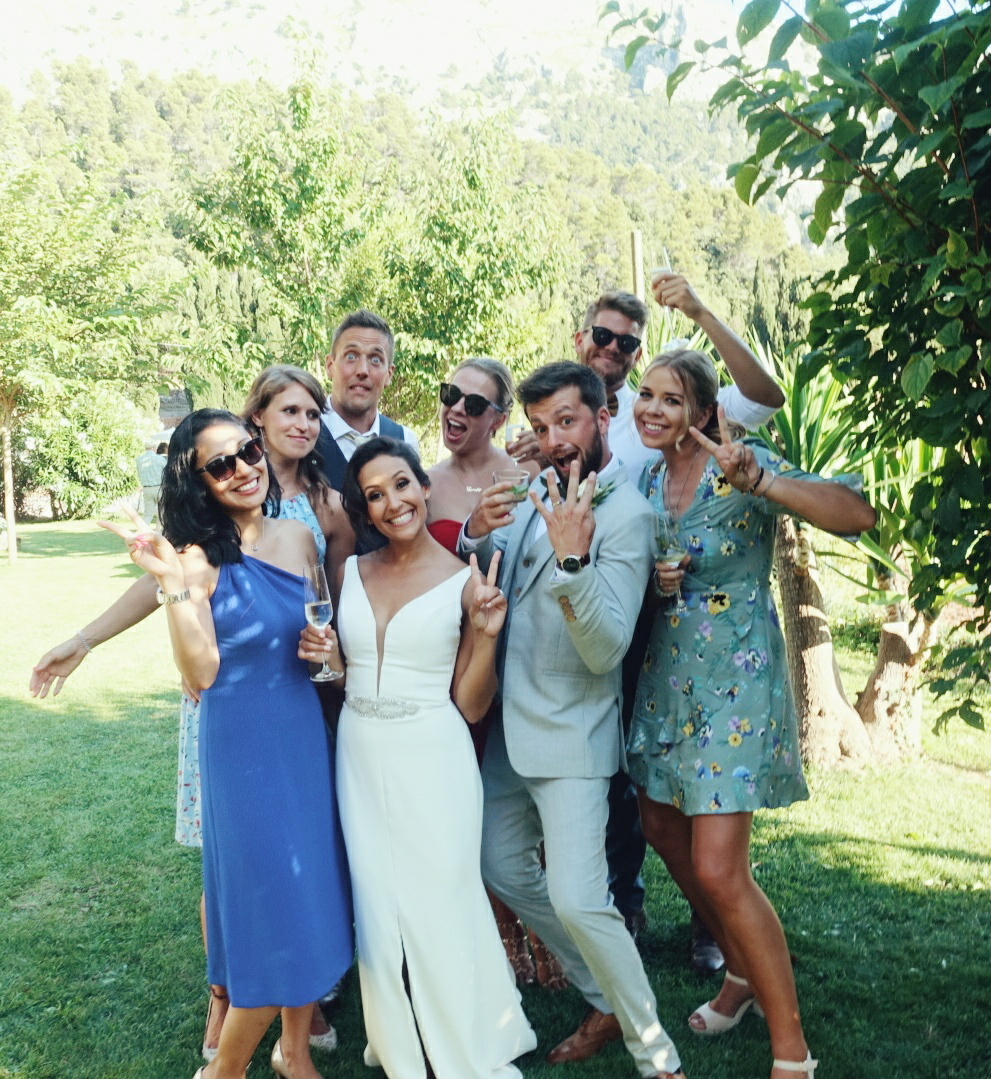 This weekend was the wedding of Beth and Ashley (Bashley) in Mallorca. Beth as one of the biggest fans of my blog deserves a detailed recount of the best day of her life (and Ashley’s).

I set off on Thursday to Leeds Bradford airport, which Tom only recently discovered existed as he realised that there are airports in the UK outside of London. Every man and his dog was going on holiday in Leeds and every woman was on a hen do. One woman was dressed in a chicken costume. The airport was hotter than the sun due to the UK heatwave which no one is aware has been happening because it’s been so scarcely reported on or discussed on social media. People were videoing the rain on instagram yesterday. After sweating more than I ever would in Penang I got on the plane to discover I was sat next to a child. The child proceeded to tell me she was in year 3. “I’m a year 3 teacher” I told her. “You’re not though are you” was her response. It was going to be a long journey. She asked to show me her sharpie collection, asked me about my bracelets, asked me what would happen if the plane fell out of the sky…and so on. At one point her dad turned to me and said “She’s got ADHD you know and she’s pretty much unteachable, what do you think I should do about it?” I don’t know stranger because I am a TEACHER OFF DUTY. As soon as we arrived at Palma I ran.

I got a taxi to Beth and Ashley’s friend’s villa in an unknown location. I had an entire mini bus to myself and the driver took me to a road and then told me I had to walk the rest of the way. So off I went wheeling my suitcase until I saw a familiar small figure bounding towards me. Beth was emotional even at this point. The rest of the night was spent drinking wine and gin, meeting new people and catching up on the past few weeks. The boys created a game which consisted of standing in a circle throwing a lemon to one another. We marvelled at how simple male interaction can be, and how they all bonded over the lemon. To be fair the lemons are impressive in size.

On Friday I got up and registered where I was. Our air bnb was pretty great. View from our balcony: 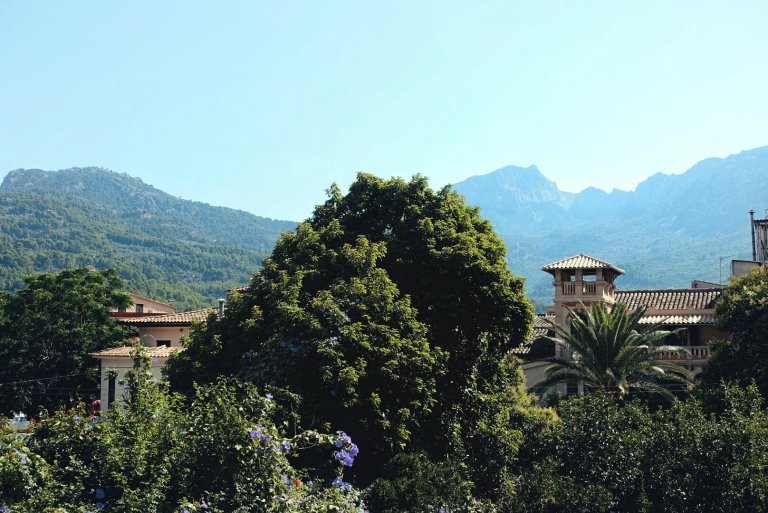 In the day we walked around, talked about lemons some more, met Angélica and went to the port for some sangria. 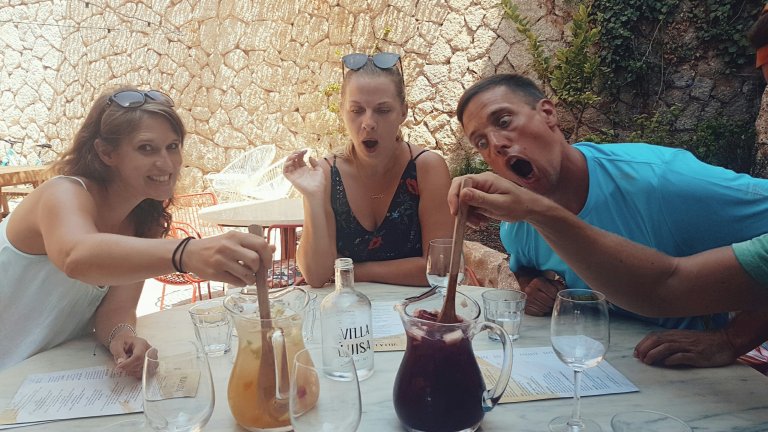 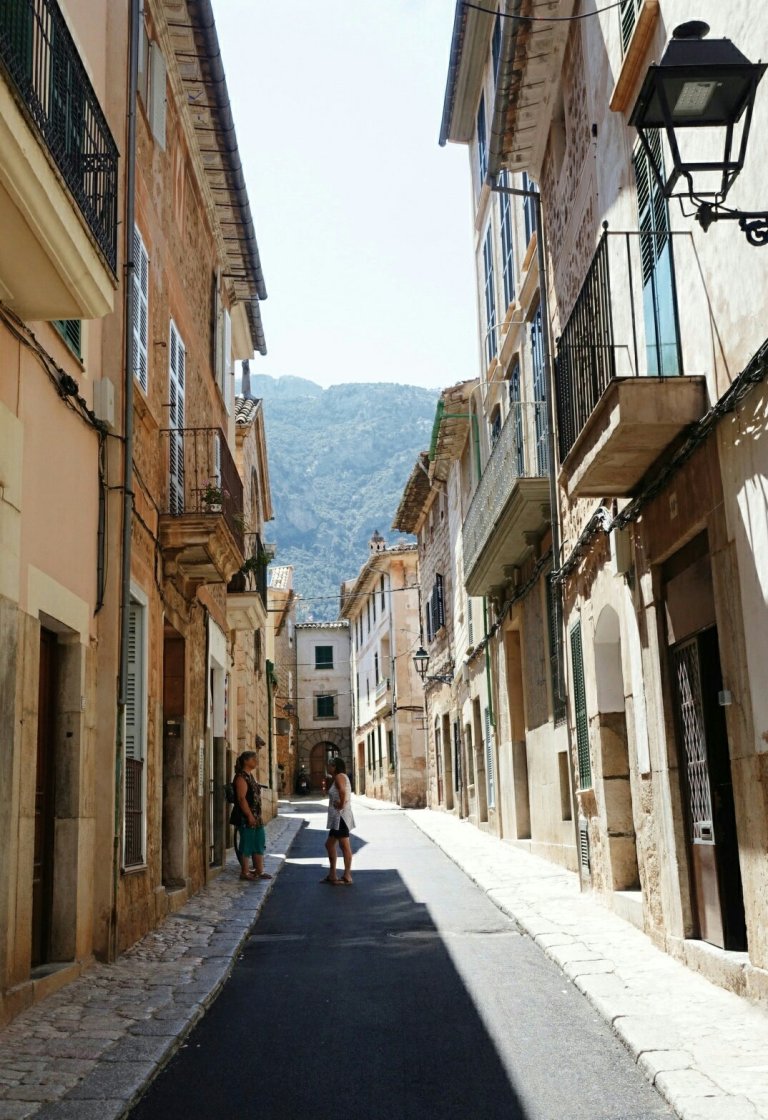 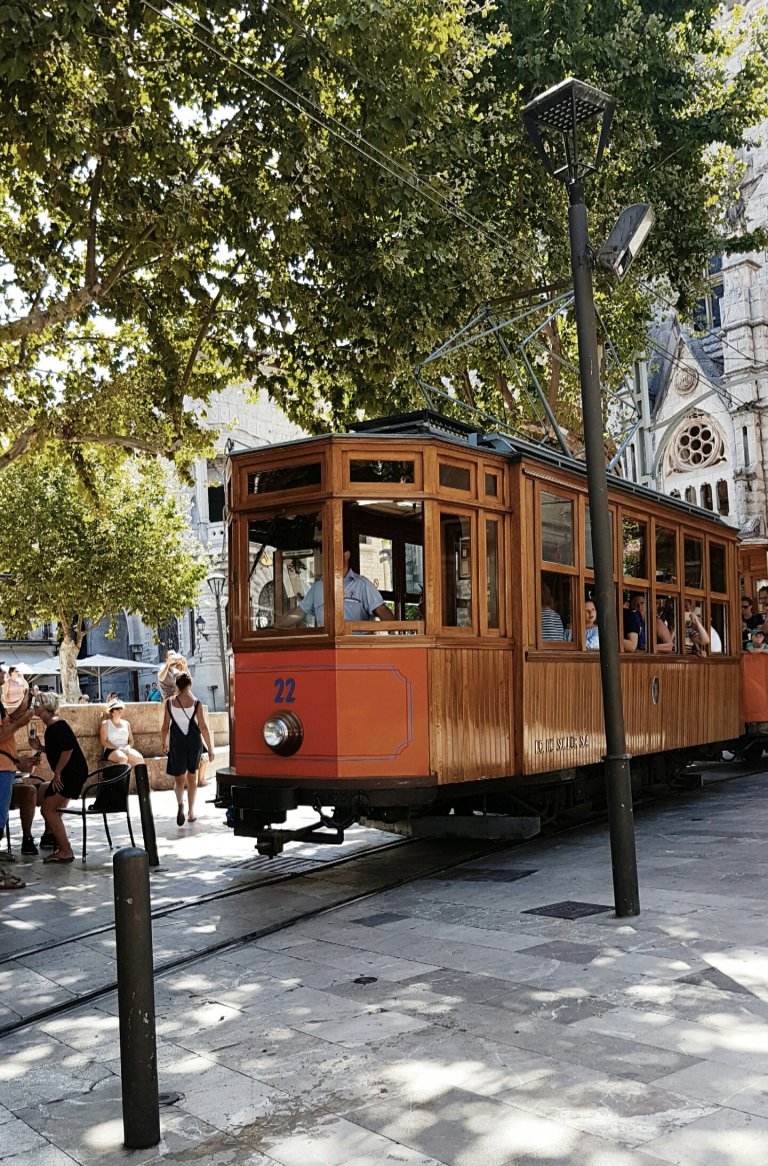 In the evening we went for paella and drinks in Fornalutx, the village where the wedding would be the following day. It’s been voted the prettiest village in Spain, and it didn’t disappoint. If you wanted the most quintessentially Spanish village then it’s absolutely that. 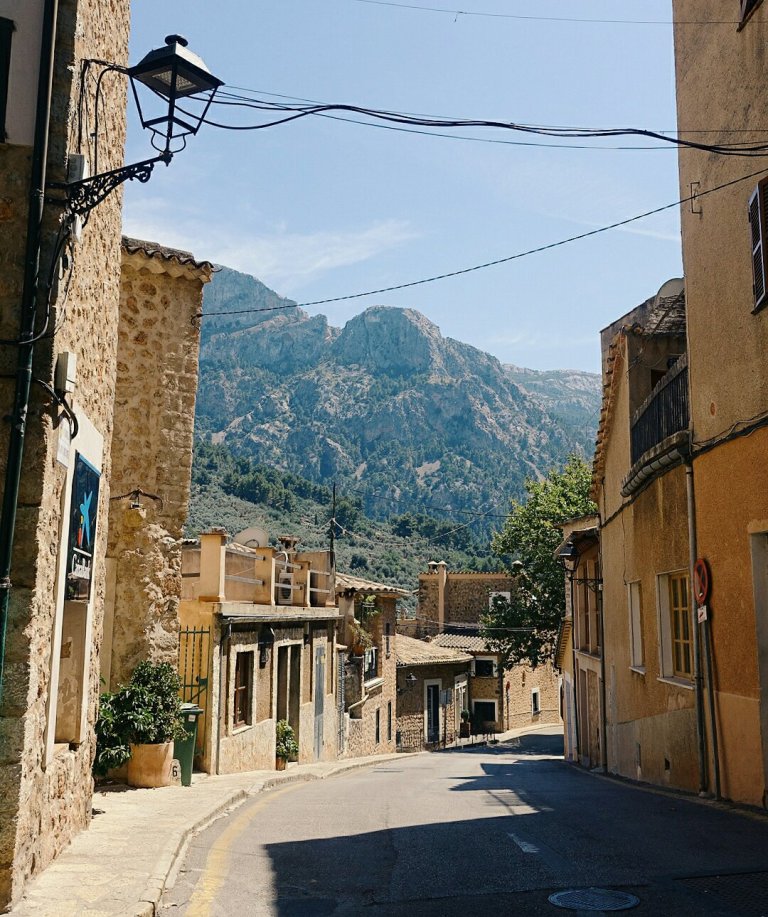 The evening was slightly more alcohol themed than some of us had anticipated and we were left being escorted down a back alley by an expat from Hull to find a water fountain and “So people won’t see you”. It was all fine. I met lots of people I’ve heard a lot about and my favourite moment was when Beth introduced me to Amy by referencing Nova and I got so excited and said “Oooh do you know her?” Oh Novs. 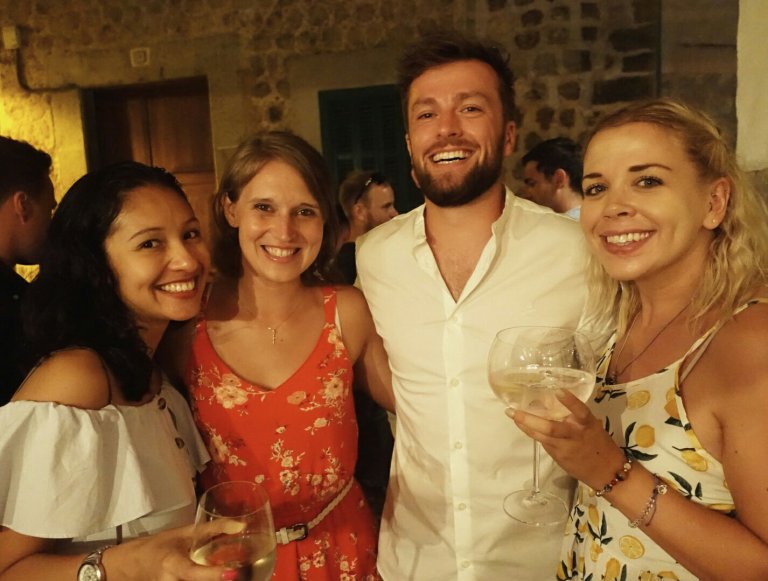 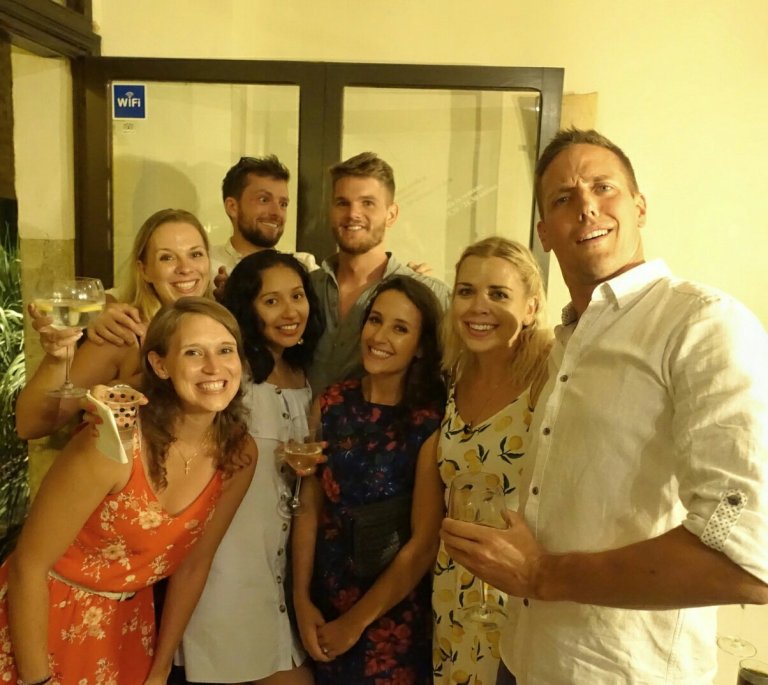 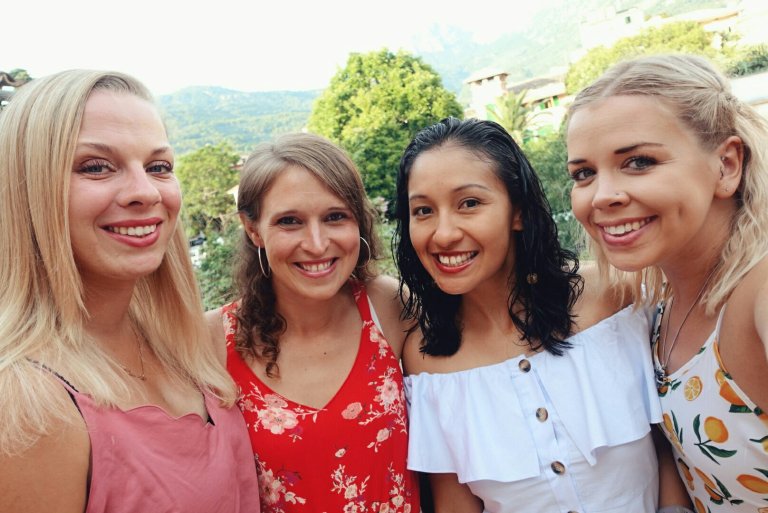 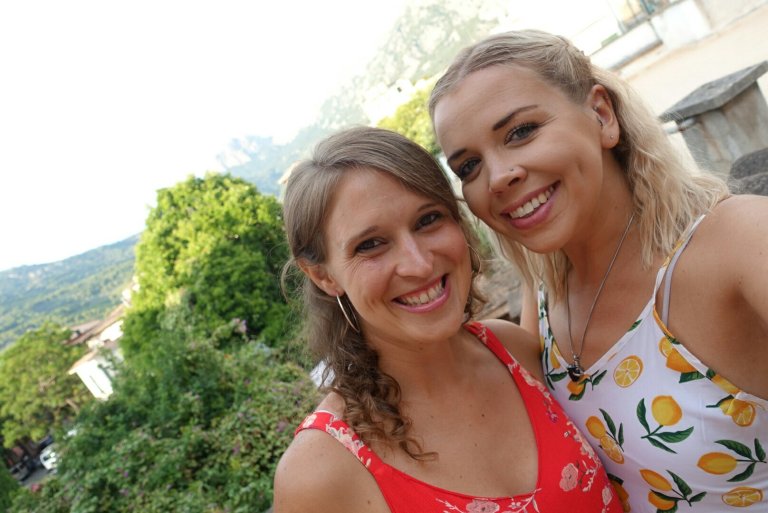 Saturday came and we hung out for a bit and then got ready for the wedding. We actually arrived on time and were the first people in the church after Ashley’s parents (mainly because it was cooler and had fans). 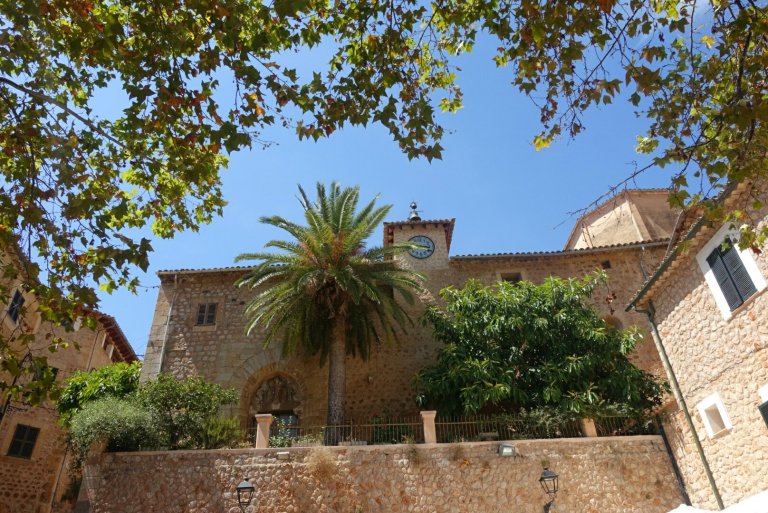 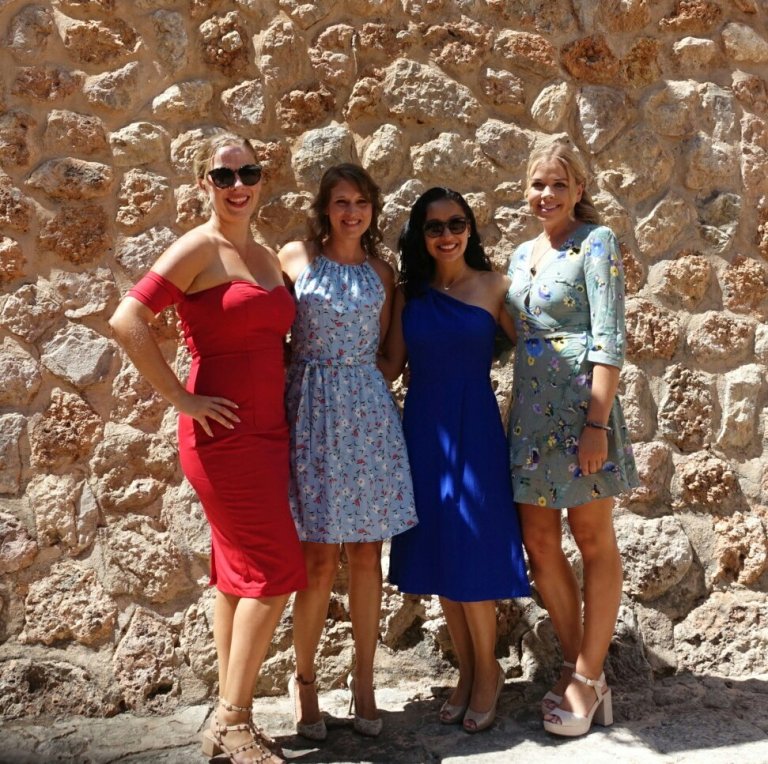 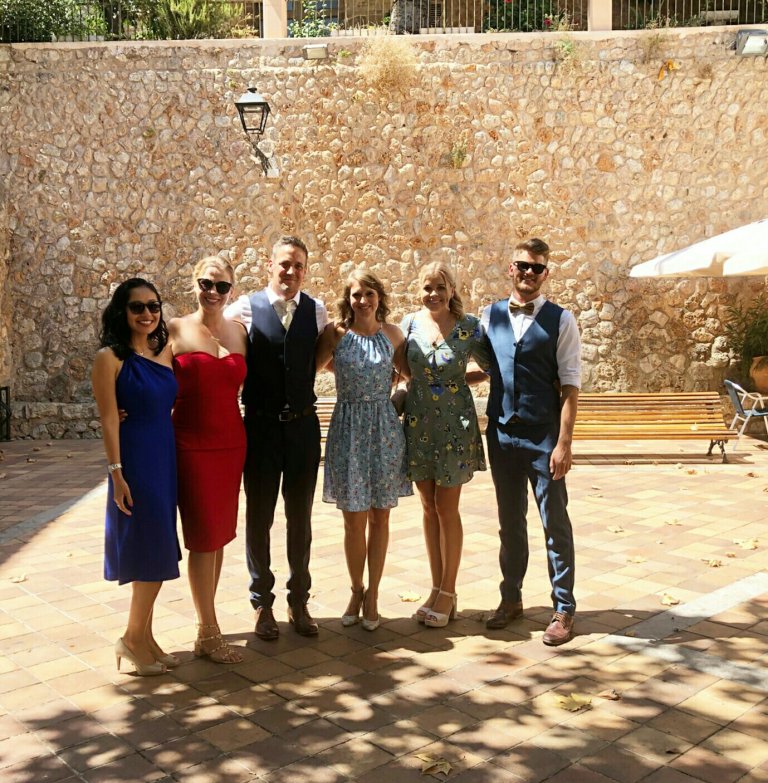 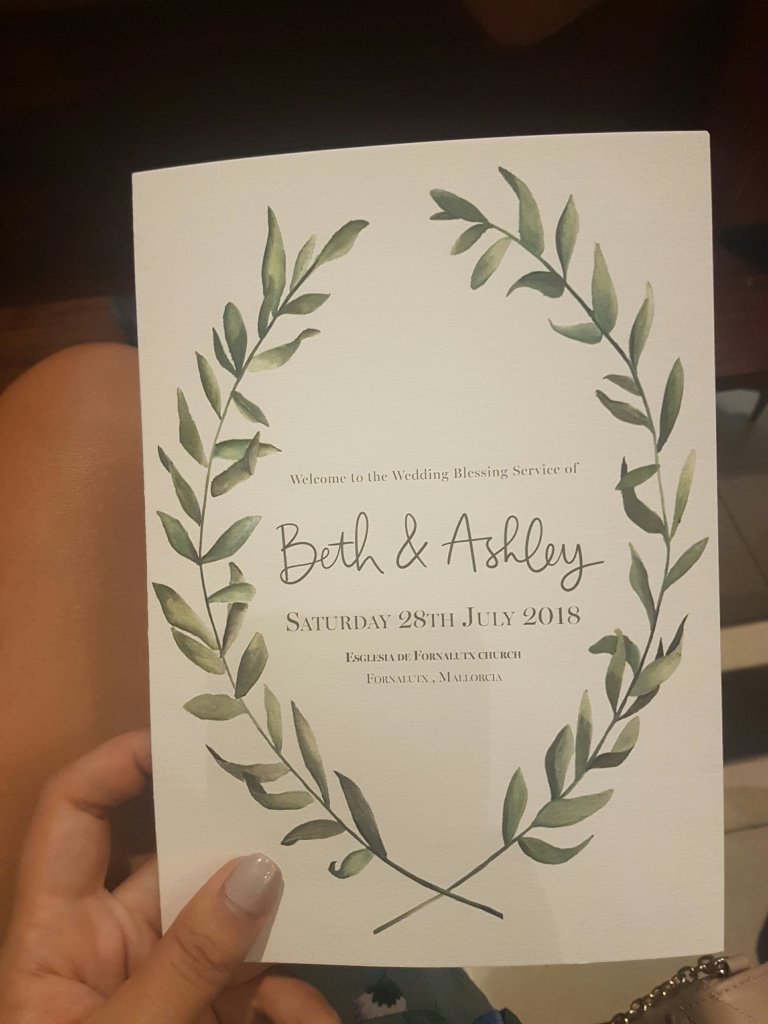 The wedding was lovely. Beth looked absolutely stunning and I felt a rush of emotion when I saw her. Ashley looked over excited and over heated. The ceremony was great, the priest was fun and we had to redo the part where those present are supposed to say they will support the marriage because no one said anything. Possibly we were all stunned by how beautiful the ceremony was… or no one was really paying attention. We ended with the Lord’s Prayer which apparently I still remember from my Christian primary school days. We threw olive leaf confetti over The Byrnes as they left and were watched and papped by tourists on the steps.

I took no photos of the ceremony sorry.

We then drove up to the reception which was at the Finca Monnaber,up the mountain road from Fornalutx. Most beautiful wedding reception destination ever. Congrats on that decision Bashley. 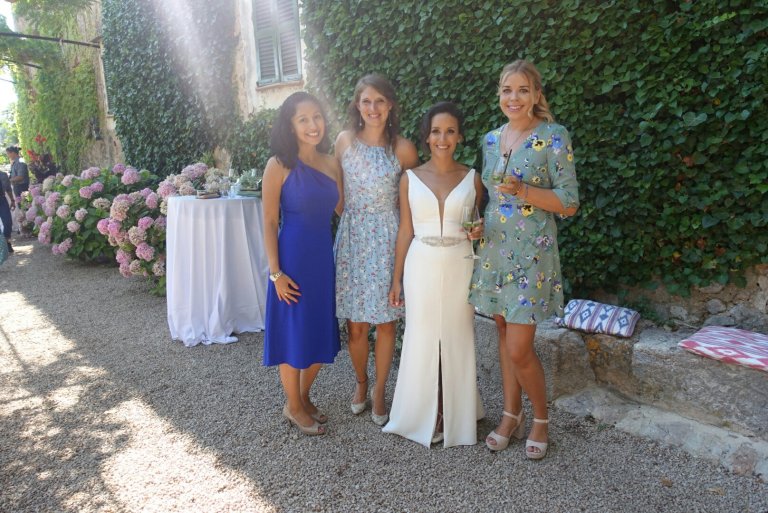 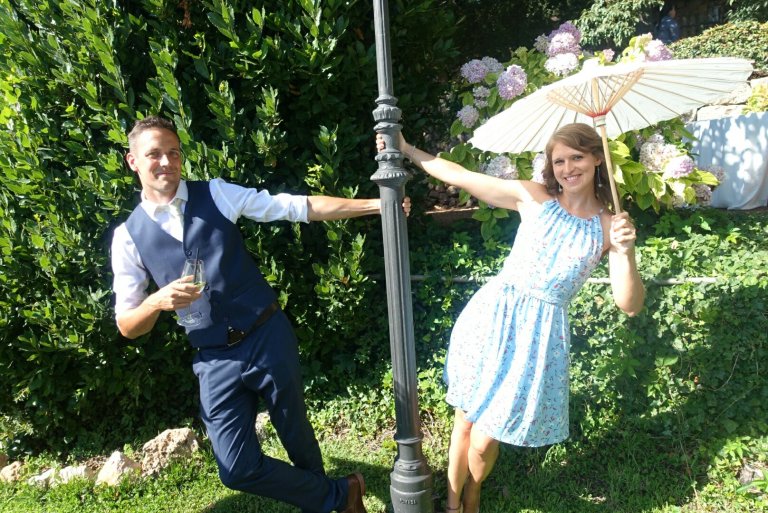 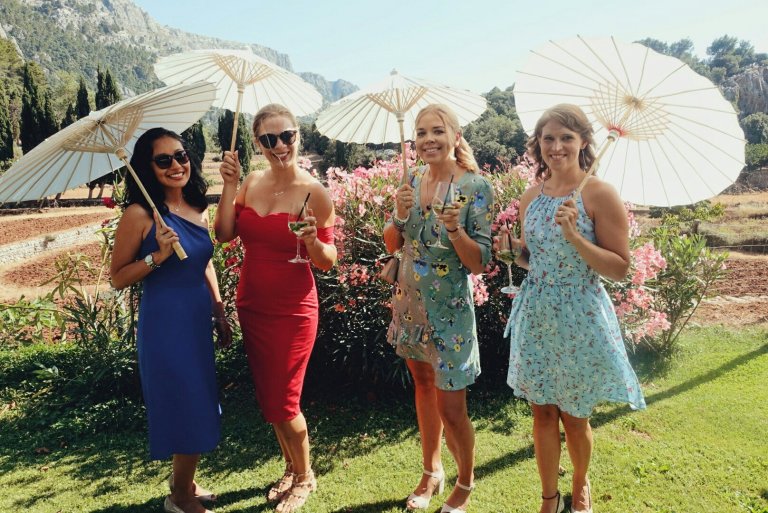 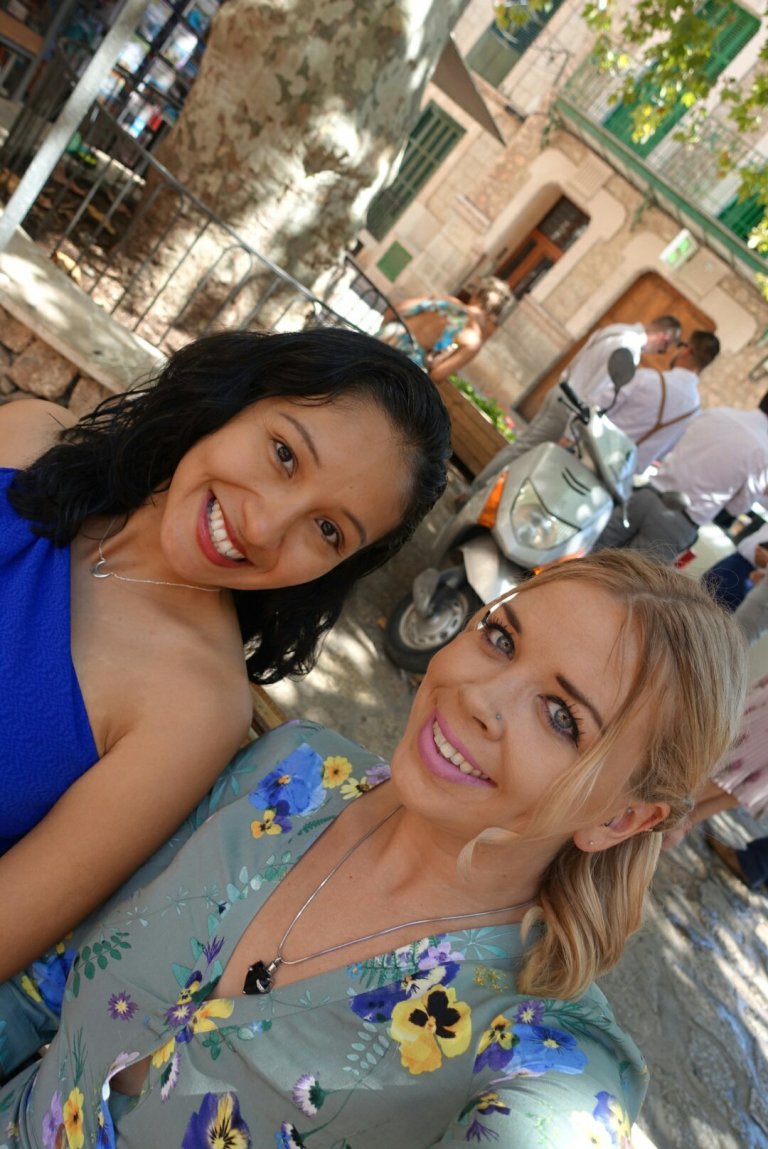 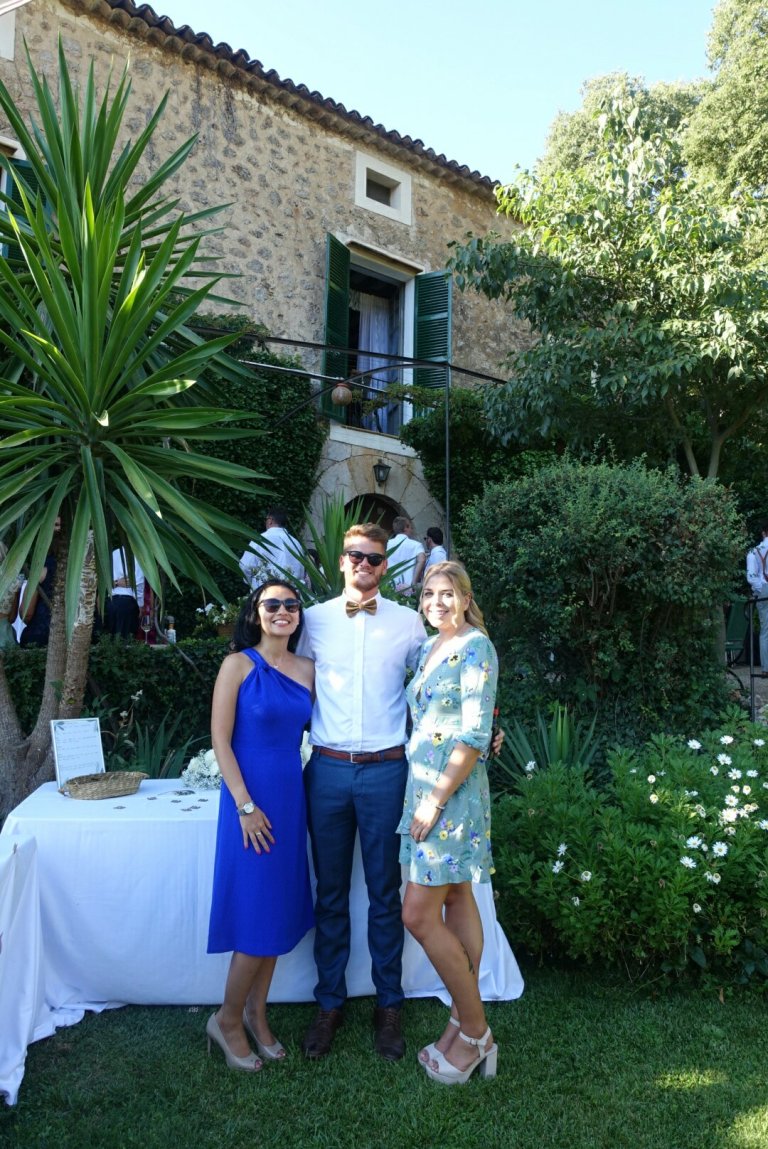 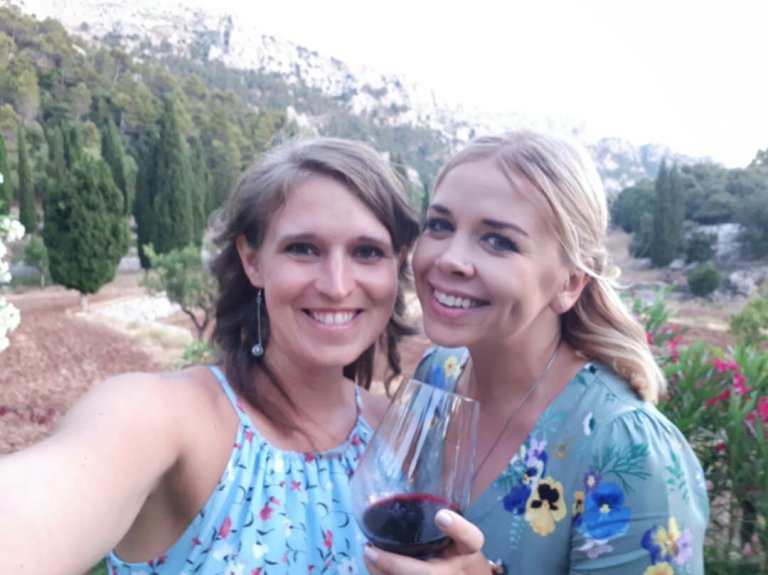 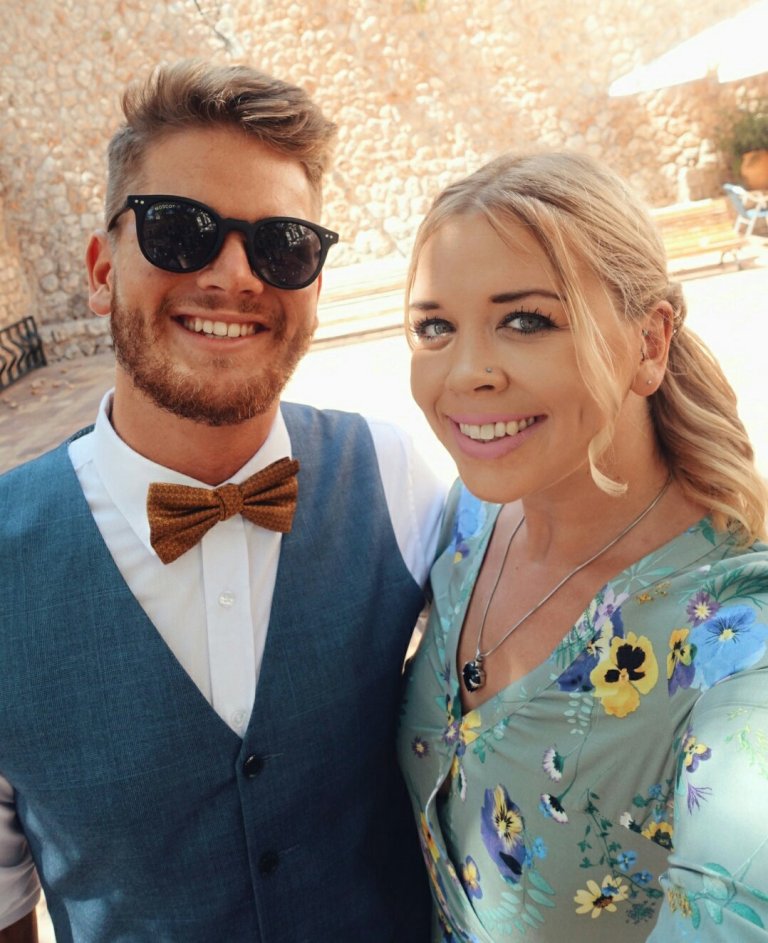 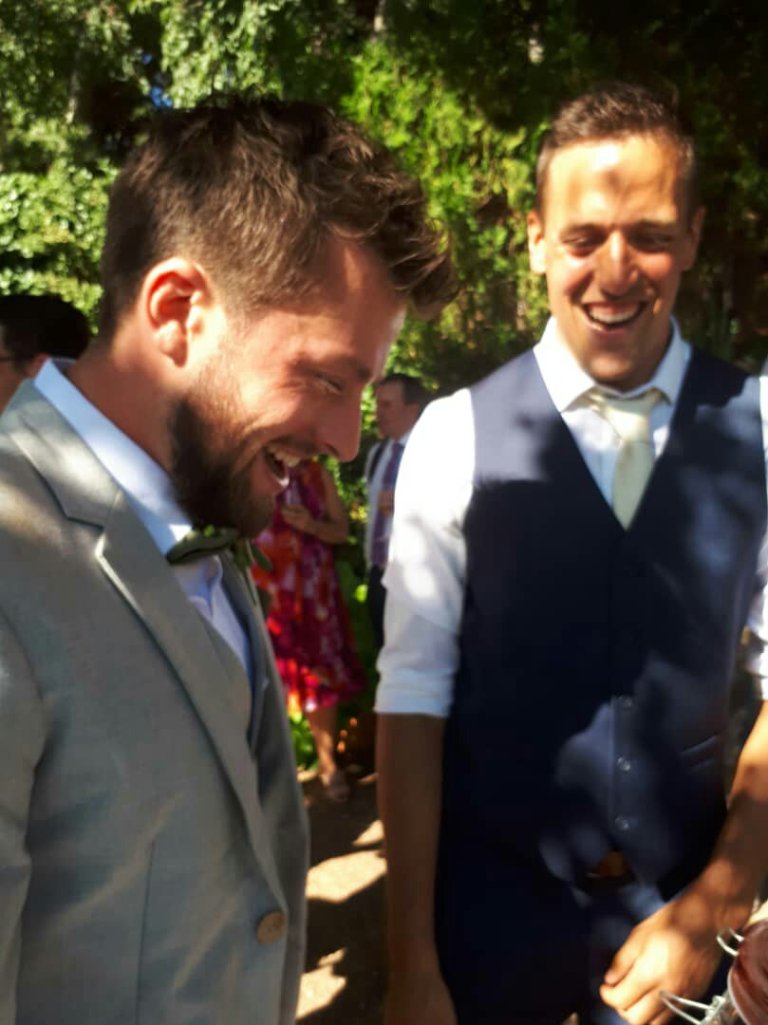 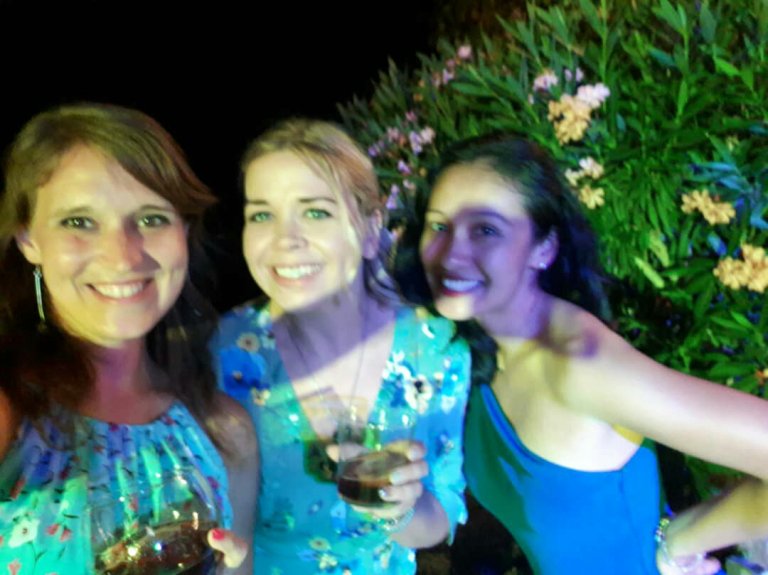 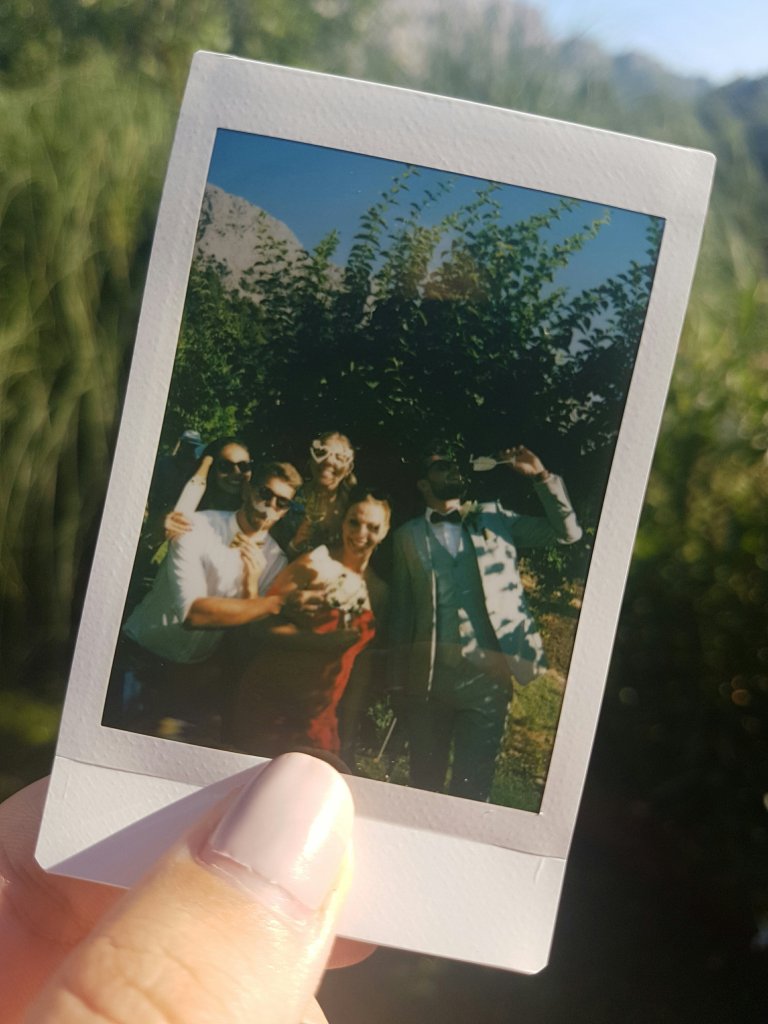 We chatted to people, mingled a bit, tried to stay in the shade and took a lot of photos.

The table was one long table headed by Batu and Bungah’s names in frames (Beth and Ashley’s cats “The girls”) who sadly couldn’t join the celebrations. The meal was amazing, more food than I could ever have managed to eat. I felt really proud of Ashley for his speech, which rhymed. All that poetry we did in English really paid off. It included a joke at Tom’s expense which is always well recieved. Beth’s dad is just great and his speech was funny and touching. Beth’s mum added some very funny jokes towards Ashley which are always appreciated. The best man speech was heartfelt and very kind towards Ashley. You got off lightly. At one point sheep started running past us which was excellent. My dress came undone at the front and Beth’s mum was thankfully on hand with a needle and thread to sew it back together so somewhere there are a lot of photos of her with her hand down my dress. 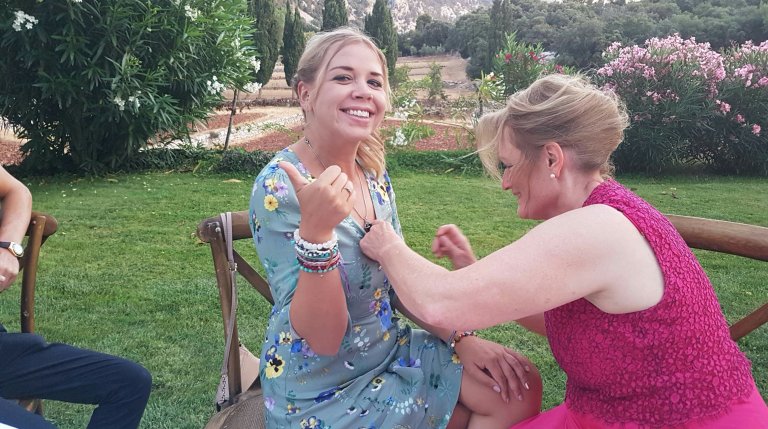 Tom made a request for sewing as he had split his trousers and lost a button by this point but it was too time consuming a job for that moment. 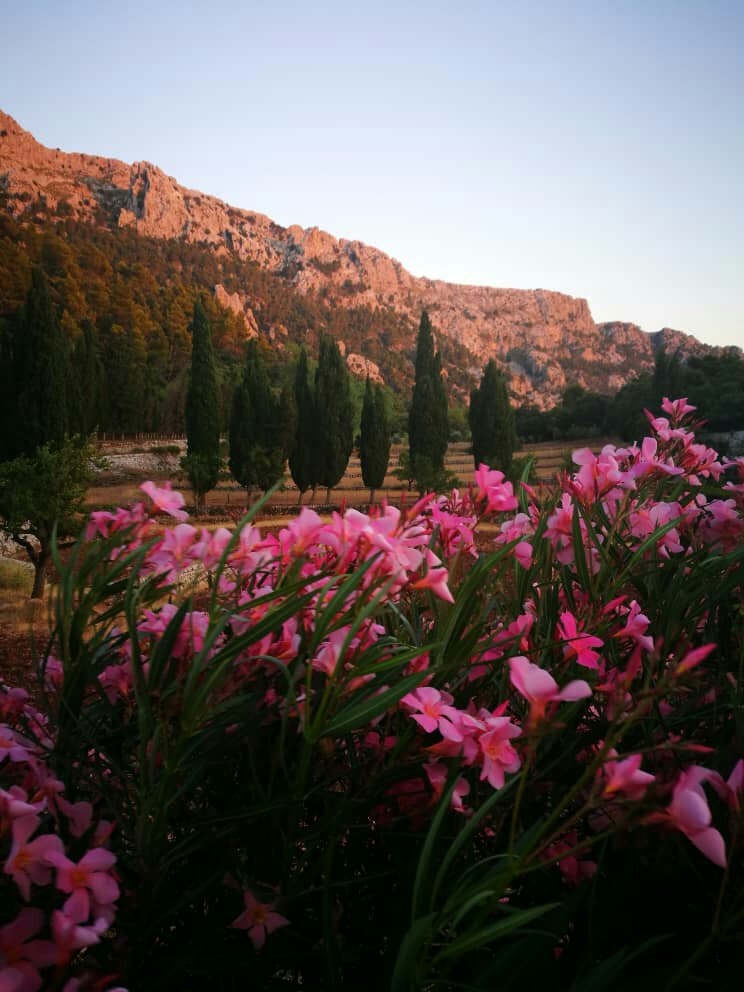 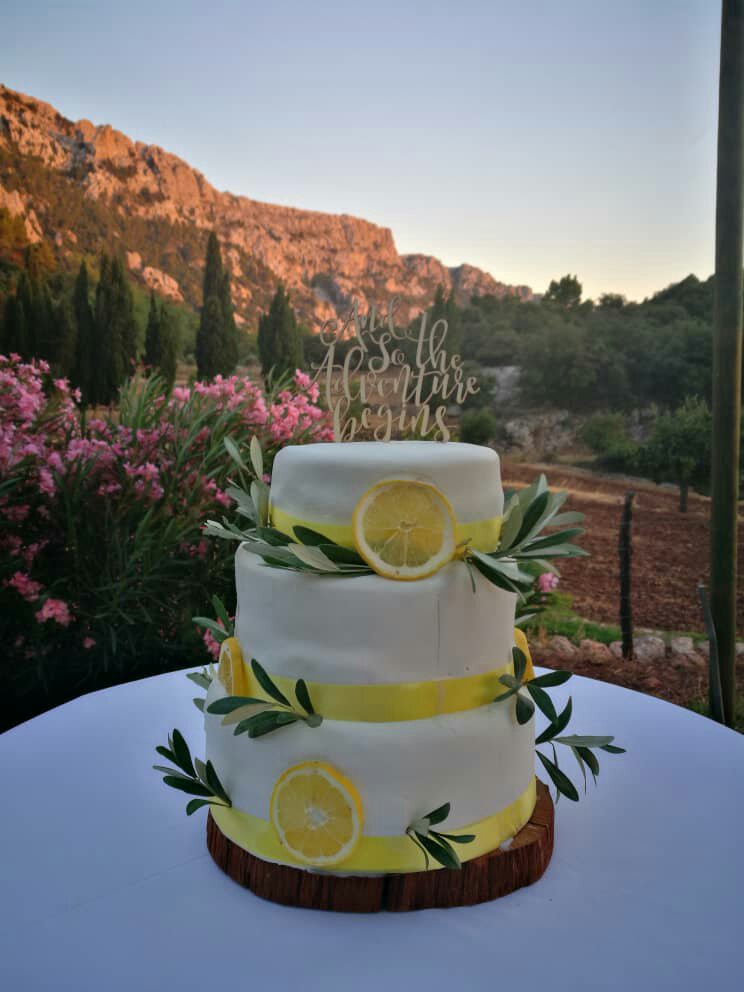 It really was an absolutely stunning location. We did a sparkler tunnel and Guy really crossed a line when he quoted “Avada Kedavra” whilst pretending his sparkler was a wand.

The rest of the evening was spent dancing continuously for 6 hours. The play list was on point, the company was the best and the bar was free. Ashley took this to the extreme by pouring whiskey into people’s glasses. At one point a few glasses had been smashed and I stood on glass and just asked Jen to pull it out of my foot and then carried on dancing. On the way to the bathroom I stood on another piece of glass and slashed my big toe. Tom also stood on my foot so what I’ve learnt from this is don’t take off your shoes at a wedding. I educated Jen and Angélica about the genre Brit Pop, and we may have encouraged Beth’s mum to “get low”.

We got home very late, quite (very) drunk,very dehydrated and very very happy. We had our key and the groom’s men did not. We did leave it in the door for anyone to break in and steal but that didn’t happen so it’s all good. We all agreed it was so much fun from start to finish and we loved it. We were lucky to make new friends with Ashley’s uni friends who we shared a house with and to spend time with Jen and Andi who move to Colombia tomorrow (!!!).

Beth and Ashley, you’re now “The Byrnes”. Still not sure how I feel about this Beth Harris. You’re both wonderful, cherished friends of mine and I’m absolutely so grateful to have been able to share your wedding day with you. I’m so happy to have met all the important people in your lives finally. Seeing you every day, working with you and hanging out with you all the time means I’m very emotionally invested in your relationship. Also you’re my family ❤ I love you both and I wish you all the happiness and adventures for the rest of your lives. 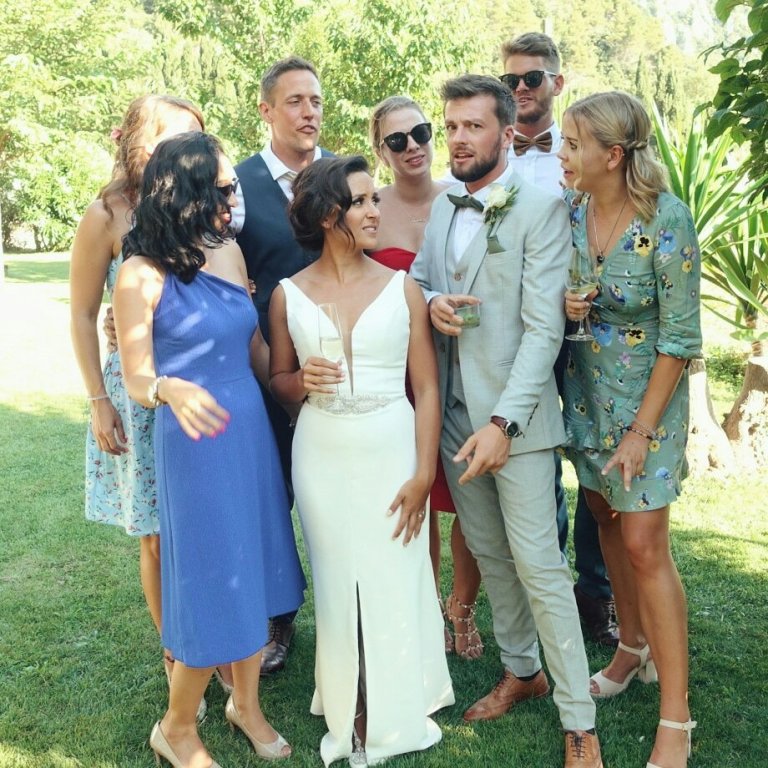 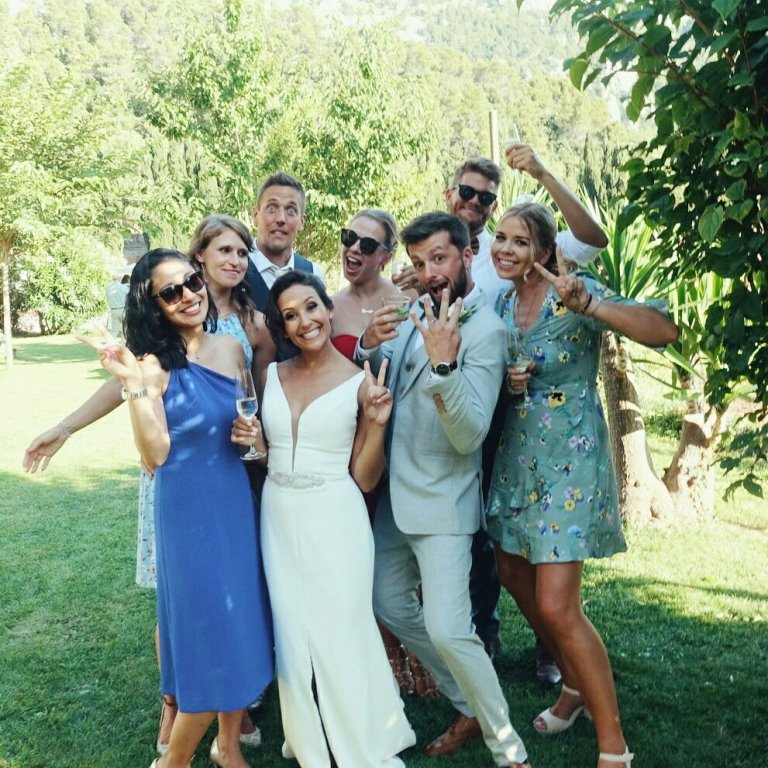 Penang family is for life, not just for Christmas.

I'm a 31 year old international teacher writing about things I think and do. I like poetry, the outdoors, the moon, tea and animals. View all posts by lclovegood