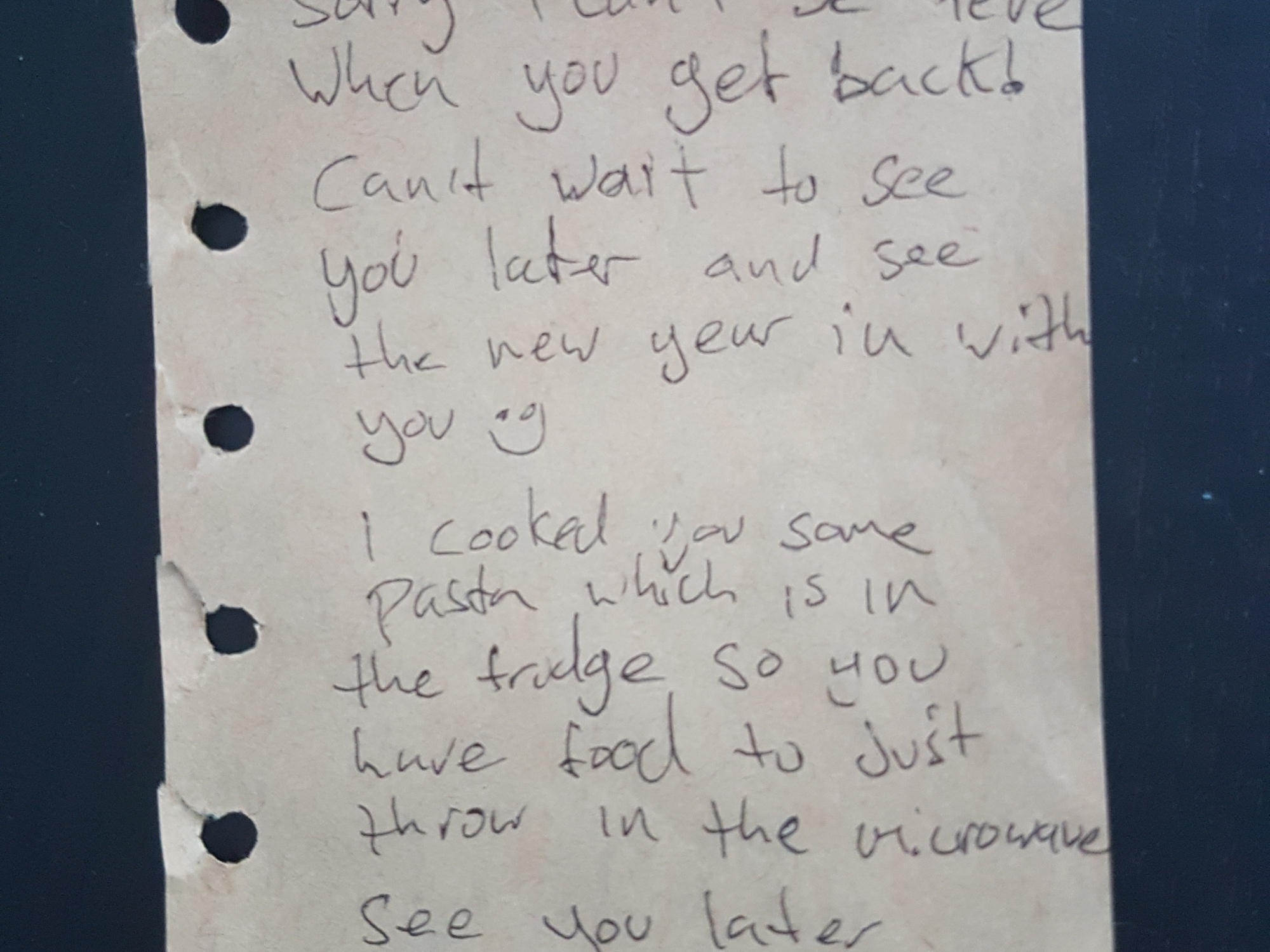 This blog post is dedicated to Robert Pizor, who I know will get a lot of comfort from reading my words. I know Jerry loved you fiercely and protected you, much like he did with me.

Today is day 52. When this happened I didn’t ever envision that I’d be alive on day 52, or that 52 days without Jerry could possibly continue. It’s very strange to see the world turning and things happening all around you when you’re stuck on January 3rd, or January 2nd if it’s a more comforting time.

My whatsapp predictive text has now listed my most commonly written word as “Jerry”, and when you click to see what it suggests next it’s all past tense verbs: “would” “had” “loved” “won’t” “said”…and then there’s “I”. When you click “I” it comes up with “love”, “miss” and “need”. It’s strange because it’s whatsapp but actually this pretty much sums up the situation.

It’s taken me a long to time to speak about JP in the past tense and I don’t even do it consistently now. He’s so very much alive in my head it’s almost like he’s just on the other end of the phone or arriving home soon. The only time I ever feel any kind of joy is when I’m talking about him, so I wanted to write down some more things about him.

When Jerry first stayed over in my apartment it was the day after we met. He didn’t come round with the intention of staying because we never talked about that. He bought me a Dominos which is out of his price range and not even that nice so I guess this was him trying to impress me. It got to about 2am, considering I had to be up at work at 6 I said “I’m quite tired” and he said “yeah let’s go to bed then”. I wanted to say “erm this is not your house” but I didn’t and he stayed every night onwards.

Once when I was ill he left work early so that he could come back and, I assume, be practical and helpful. In reality he just paced up and down stressing about me and asking what we should do and then when I fell asleep he lay next to me watching South Park with one hand on my head. This is my bench mark for all future relationships. Someone who will leave their job just to sit and watch me sleep when I’m ill. On new years eve he left work and surprised me by walking in on me when I was in my jet lagged sleep. He said that he came back because I said I was too tired to heat up the pasta he had made me. This note sits on my fridge.

Who knew how important that note would become to me just 3 days later.

That’s the only note he ever left me but I used to leave them for him every day because I’m a note giving kinda girl.

There are literally thousands of memories going round and round in my head all the time. Jerry sloping around with his trousers half way down his legs, Jerry asking me how he should cut up his new t shirts, Jerry asking me if he should buy new flip flops, Jerry rolling a joint, Jerry opening a can of tiger, me pulling that bloody bandana up from his eyes so he can actually see, Jerry stroking my head, Jerry making me a terrible cup of tea, Jerry playing songs for me on guitar, us dancing, watching South Park, looking at storms…so so so so so many pretty boring things that were just my entire life.

Every single day maybe 20 times a day things happen that make me think about telling him. Today we found a vintage second hand shop that sells band t shirts and some were already cut up. There was a suitcase full of bandanas. How am I supposed to discover such a treasure without Jerry? I could imagine the entire conversation we would have had about it. I looked at what I would have bought for him and then I felt sad and lost.

Jerry was the most complicated and simple person I’ve met. He had an opinion about everything and the only time we argued was either when we disagreed or when he forgot something I’d deemed to be important. His memory was shocking. His opinions were not always the same as mine. He mocked me for some things and once I called him patronising. He was so upset that he upset me he thought for about 3 hours about what to say and then said “I’ve never loved anything more than cigarettes before and they never argue with me but I love you even more than them and that’s a lot.”

He carried around a lot of self doubt and anger, a lot of insecurities and he never thought he had any real worth. It took him a long time to accept that I loved him. It took me a long time to put down the walls I’d created over the past two years or so. There’s no way we would have loved like we did if we didn’t have all these “issues” because that was how we understood one another. I’ll never ever settle for anything less than being loved like that. We both kind of came to terms with being on our own and then we found one another and realised that was actually better. Luckily I have all the tools to be on my own again but it’ll never ever be the same now because I haven’t chosen it.

Jerry and I used to eat shewerma twice a week at least. We talked about shewerma even more often than that. We talked about how much we hated things. We complained about people. We talked about Nova. We talked about the future a lot. Our future. Where we wanted to go, and we worried about it too. We didnt know how to fund our ideas. I honestly worried about Jerry all the time. Sometimes in the night I’d check he was still breathing. He just seemed like something might happen to him, mostly because he smoked too much and also because he always told me he was going to die young. I was so afraid I was going to lose him because I was very aware that I really loved him. I never anticipated I would be correct to be anxious.

I want people to see the person that I loved and the way he was to me. I know he didn’t show that side to anyone else. He saved my life and that is like the final act of all of this. If I could have saved him I’d have done it too. I loved him in so many ways because he truly deserved it, and I’m very glad he hasn’t had to deal with this being the other way around. He gets to be young and happy forever and the rest of us just have to figure out what to do now.

I’m going to write a separate blog about what’s been going on because I don’t want to cloud this one. For those of you attending the UK memorial I plan to say some words there that will hopefully do him justice.

Here’s the latest photo that brings me the most comfort:

Much love to all the Jerry Ray Pizor fans who I know are still falling into the hole of grief and trying to figure out how to climb out on a regular basis.